Caterpillar retiree finds a new career as a blacksmith 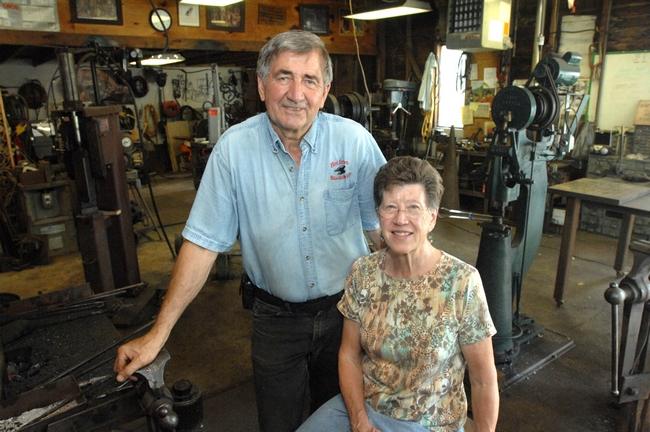 Bud and Janelle Harvey pose for a portrait in the well-equipped blacksmith shop behind their Chillicothe home. Bud took his first blacksmith class several years before retiring from Caterpillar where he worked as at metalurgical engineer.

MOSSVILLE
As a metallurgical engineer with Caterpillar Inc, Bud Harvey's relationship with metal was fairly scientific. After retiring in 2002, Harvey has continued to work with metal, but now he gets really dirty in the course of a day.

"I like to hammer - I like to get things hot and hit it really hard," Harvey said with deadpan humor while standing near the main forge in the blacksmith shop beside his Mossville home.

Harvey is the owner of Hot Iron Blacksmith. He took his first blacksmith class in 1997 while he was still working at Caterpillar.

"A friend of ours was taking a class in Potosi, Mo. He talked me into going," said Harvey.

Even though he knew nothing about blacksmithing, Harvey got to teach during that class - the instructor, a world-famous blacksmith, asked the engineer to speak about metallurgy. It was a perfect fit - the week-long class at the Ozark School of Blacksmithing gave Harvey the bug.

"When he came back he told me if I had been born 100 years ago, this is what I would have done," said his wife Janelle Harvey.

Since blacksmithing is a very tool-heavy art form, Harvey had a lot of things to buy after he got back from Missouri.

"I didn't have any blacksmithing tools," he said. "I started going to farm auctions, and we'd check auctions online. I slowly started to accumulate tools. As I got more well-known, people started coming to me with old tools to sell."

Today Harvey's shop is well-equipped not only with tools he's bought, but also with tools he's made himself. Most of the tools he purchased needed restoration - a power hammer built in 1908 was in pieces when Harvey found it at an auction in Bartonville.

"I rebuilt it," he said. "The guy who bought the patent for this machine was offering classes on how to rebuild them at his shop in Nebraska. I met him at a national blacksmith show."

Harvey owns about 25 anvils, all produced between 1830 and 1920. But they're not all for his daily use - he teaches classes to as many as 16 students at a time. So far his classes have been for teenagers and Bradley University students interested in engineering who take a special class through the Peoria Chapter of American Society for Materials, but Harvey has plans to open a blacksmithing school for the general public.